After Eurobasket 2015, Igor Kokoskov took over the Slovenian national team. Accordingly, the leaders of the Georgian Basketball Federation had to look for a new coach.

It was announced on February 18, 2016: Greek specialist Ilias Zouros will train the Georgian national team. The contract is for 1 + 1 year and in case of entering Eurobasket 2017, it will be automatically extended.

– Our team has great potential. Otherwise, I would not agree to train the Georgian national team. Basketball is the same everywhere, both in America and in Europe. I can not invent anything new, but I can tell you that the teams trained by me always excel in good defense. Defense, rebound, less mistakes – here’s the recipe for success. You may not be able to score one ball, even miss the second, the third, but if you are strong in defense, you still have a chance to succeed. And if the defense fails, you will have no result. No one should think, as if I refused to attack, it’s just a simple logic – after a good defense, even better attack can be launched.

– We lost the battle and not – the war! I believe that we will still achieve the set goal, which is to get to Eurobasket, – said Zuros after the match.

In 10 days in Montenegro, his team played one of the most beautiful games in the history: 1:21 minutes before the end of the match, Viktor Sanikidze took two steps from his own half of the court and shot the ball to the Montenegro basket. I’m sure that in that episode, those who were watching the game could not abstain their emotions… Viktor scored the ball and advanced us 85:84. We beat the hosts and finally won 90:84. With this victory, Georgia took the first place in the group and won the ticket to Eurobasket for the fourth time.

With the Acropolis Cup

In the preparatory stage in 2017, we defeated such teams, we believed that we would be favorites at Eurobasket as well: in Lithuania we beat the hosts (81:70) and the Latvians (73:69) and arrived from Klaipeda as the winner of the Four Tournament.

This was followed by the Acropolis Cup, even taking part in which is considered a great prestige. With the effect of Giorgi Tsintsadze we defeated Greece 72:71, beat Serbia the next day (68:66) and won the Acropolis Cup.

The European Championship has started and Georgia again made nervous the President of the Lithuanian Basketball Federation Arvyda Sabonis: when you lose to one team twice in a month, that meens it’s better than you, – complained the Lithuanian legend after the match. His team lost the opening match with Georgia 77:79.

The first victory made Ilias Zouros think a lot:

– We must keep calm, keep moving forward and then enjoy success. You ask me, why don’t I smile? Precisely because nothing has been decided yet, I have been working as a coach for a long time and I know how difficult it is to get to the end after a good start”, – said Zouros.

Unfortunately, everything happened in such a way that Zouros tried to avoid: Georgian national team put a lot of physical and emotional energy to win against Lithuania, which was followed by three losses to direct competitors – Germany, Italy and Ukraine, and the victory over Israel wasn’t eough for us to reach the playoffs.

– I want to thank boys. Capital letters are required for this. Georgian national team showed its character to everyone at the European Championship! Many thanks to the Georgian fans, who followed us to the end and made each match more beautiful, – This is how Ilias Zouros said goodbye to Eurobasket. 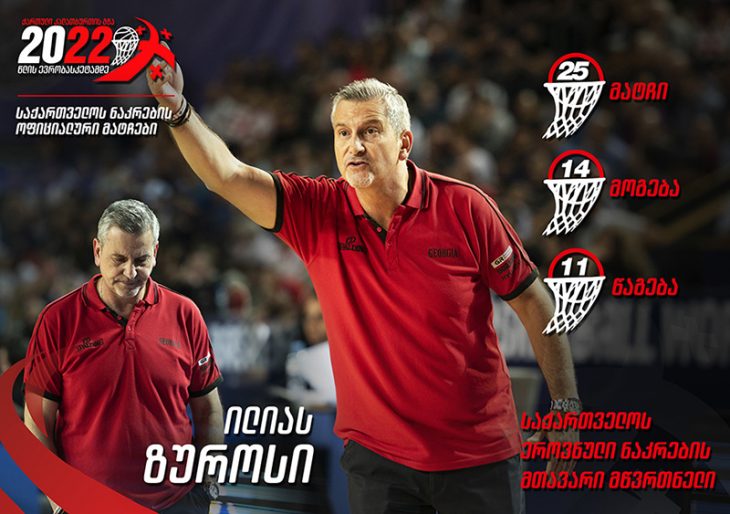 One month after the end of the European Championship, on October 13, Greek specialist Ilias Zouros signed a new contract with the Georgian Basketball Federation and started preparing for the World Cup qualifiers 2019 with the national team.

– The situation became very complicated after FIBA and Euroleague could not agree, therefore, Euroleague basketball players will not be able to play in the national team. We will not have Tornike Shengelia and Giorgi Shermadini. As you know, Beka Burjanadze underwent a surgery. Hopefully he will be back on the court soon. We have to fight very, very hard to achieve a positive result in the absence of these players.

The World Cup Qualifiers was held in two phazes: in the first group, our opponents were Serbia, Germany and Austria. Three teams would leave the group. Georgia was third after Germany and Serbia and continued to fight in the second stage, where it confronted Greece, Israel, and Estonia.

We defeated Israel twice, exchanged wins and losses with Estonia, and the Tbilisi match against Greece turned out to be one of the most emotional in the history of the national team: we lost with two points scored at the last second – 85:86.

– We did not deserve to lose in this game! – We heard such a thing for the first time from the head coach of the Georgian national team, Ilias Zouros. Earlier, his predecessor Igor Kokoskov said that at the 2015 Eurobasket, when we lost to Lithuania at the last second with three points by Jonas Maciulis (in the 1/8 final).

Serbia, Germany and Greece left our group for the World Cup.

It was also interesting that three Americans played for the Georgian national team in this qualifier – Michael Dixon started, Matt Janning and Thad McFadden continued. Thad was invited to our team by Ilias Zouros and the rightness of his step also appeared in the qualifying round of Eurobasket 2021 (which was later transformed into 2022). McFadden scored 33 points against Serbia…

Ilias Zouros met with great joy to grant Georgia the status of host of Eurobasket. He gathered young players in summer and started building a new team, which had to become the top-class team in Europe by 2021. As the Coronavirus postponed the European Championship for a year, Zouros’ task changed – the team should be ready to fight by 2022.

It was the first time that the host team of the European Championship was involved in the qualifying matches. Georgian national team should not have motivation, as it is still out of Europe, but taking as good a place in the group as possible will put it in the top basket while the draw of Eurobasket. Even if this is not the case, the main thing for the Georgian team is to win against any opponent, in any circumstance, which was proved in the first two qualifying matches. Georgia defeated Switzerland 96:88 in Tbilisi and Serbia – 94:90 in Belgrade.

After the victory over Serbia, the coach of the Georgian national team Ilias Zouros spoke about the youth:

– I am more than happy that the young basketball players got involved in the game well, showed what they can do. I have been saying from the beginning that our task is to build a strong team for Eurobasket and in this case, we need young players very much. There were mistakes, but they gained a great experience. As for Serbia, it is very difficult for us to prepare for qualifying matches, because we only have three days before each meeting. Both Serbia’s coach Igor Kokoskov and I can not do magic, the team takes much longer than three days.

We are looking forward for a good prolong to a good beginning: the next match of the Georgian national team in Eurobasket 2022 Qualifiers is expected on November 27 in Finland.

Great work behind the scenes 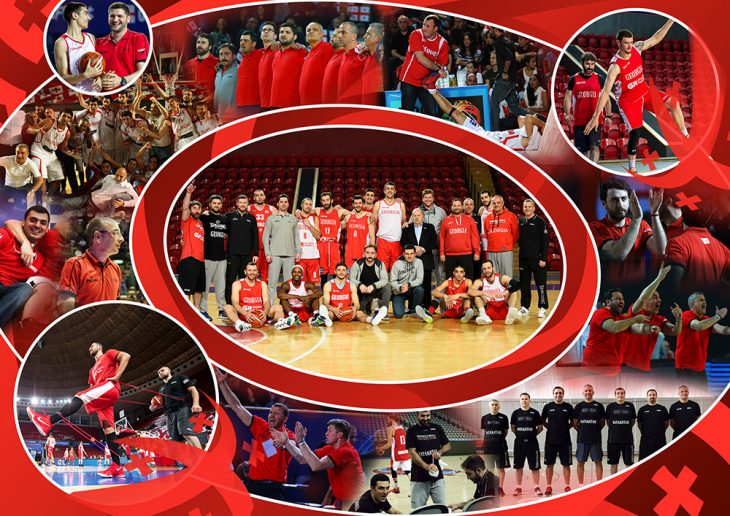 There was a time when the coach was also a selectioner, the head of the team, he was in charge of physical training and, if necessary, he also acted as a doctor. But as time goes on, basketball gets better and one man just can’t handle so many things. He may lead, but quality will not be satisfactory.

Accordingly, the results in the Georgian national team also improved with the increase of coaches and quality. Everyone, from the massage therapist to the team leader, made a significant contribution to the success of the team.

By the way, this is Atkinson, who was appointed as the head coach of the NBA club Brooklyn Nets in 2016 and still trains the Brooklyn team.

The head of the team was Merab Ratishvili. Physical training was given to Avto Beridze in the 2000s as well, and Temur Kipshidze, Bidzina Jagashvili, Temur Khvedelidze took care of the health of players. The latter is the chief doctor of the Georgian national team now. Zaqro Jvaridze, Zurab Suleimanashvili, Mikheil Suramelashvili worked in the medical staff at different times.

In 2008, Serbian Igor Kokoskov was appointed the head coach of the Georgian national team. During his time, significant changes were made in the coaching staff: Davit Ustiashvili remained an assistant, Kote Tugushi finished his basketball career and continued to work as a coach next to Kokoskov.

Mr. Igor also had foreign assistants: Jason Stoudt, Alexander Cvorovic (Physical Training), Yurica Golemats, Sandro Berkandin. Milos Gligorijevic and Tihomir Bujan were appointed as Kokoskov’s assistants in the national team in preparation for the Eurobasket in 2015. After the end of the European Championship, they had an even more responsible job – they were the leaders of the Georgian youth national teams. Milos Gligorijevic is still in this position, and at the same time he is the head of the Georgian U-20 team.

From 2016, Ilias Zouros was appointed as the head coach of the national team instead of Igor Kokoskov, and the strategy was also changed. The Greek specialist again relies on Milos Gligorijevic and Tihomir Bujan, he brought his compatriot Giorgios Limniatis, and Irakli Shioshvili works as a physical training coach. And an experienced Greek with him is Giorgios Vavetsis.

As for the change in strategy: the coaches in the coaching staff of Ilias Zouros change regularly. The more Georgian coaches are given the chance to work at a high level, the better. Kote Tugushi and Irakli Khoshtaria assisted Greek coach at EuroBasket 2017, then Dimitri Jakobov, Davit Rogava and Temur Kankia appeared in the team.

Before the qualifying round of Eurobasket 2022, Ilias Zouros brought back Anatoli Boisa and Manuchar Markoishvili in the national team, but this time in the capacity of coaches. Paata Lobzhanidze, the general manager of the team, has been solving organizational issues at a high level for almost ten years, and the manager – Gia Sanadze has been in the team since 2004.