Another quarterfinalist of the Georgian Cup has been revealed today. Dinamo hosted Batumi at the Olympic Palace and lost 93:94 (Statistics), however, because it had won the first match of the series with 2 points (80:78), Dinamo advanced to the quarterfinals. The fate of the two-match series was decided by one point – Dinamo won 173:172 in total.

Batumi left the cup championship regretfully. The team coached by Gia Kazanjiani was winning with 6 points – 92:86 2 minutes before the end of the match and needed a three-point victory to achieve the goal. In the remaining time Vladimer Tavakarashvili scored a three-pointer, Tyler Williams scored free-throws and Tbilisi reduced the difference to a minimum.

The decisive scene was played here, when the newcomer of Batumi Thomas Wilder missed a two-pointer and Lasha Mikeladze promoted Dinamo in the return attack – 93:92. There were 28 seconds left, when Levan Babilodze from Batumi advanced the team by 1 point with an accurate breakthrough. Dinamo almost entirely used 24 seconds for the return attack, but Vladimer Tavakarashvili missed a three-pointer and Batumians had 4 seconds left for the final attack. Nemania Kapetanovic rebounded the ball and shot it right after he had crossed the middle of the court, as the time was running out. However, he missed the shot and Dinamo went to the quarterfinals.

The next match of the eighth-final series of the Cup will be held tomorrow in Imereti region. Kutaisi will host Kavkasia, the former had defeated Kavkasia in Tbilisi match by 5 points. As for the series of Rustavi and Mega, the date of the second match depends on the regulation of the Covid-situation in Club Mega. 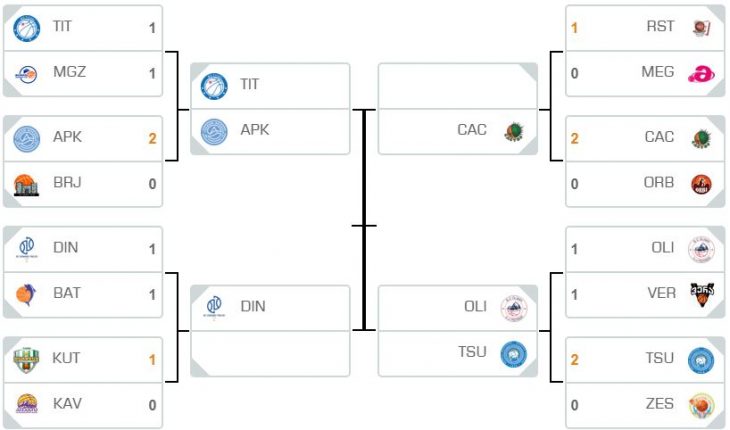