Georgia will be hosting a group phase of Eurobasket 2021! Where did Georgian basketball start, what path did it take and how did it get to the Eurobasket. Basketball National Federation is launching a new project – The Road of Georgian Basketball until Eurobasket 2021.

This is a long-term project which will start in October 2019 and will last until the Eurobasket 2021. Through this project, within the framework of Eurobasket 2021, the Georgian society will be constantly provided with information on the history of Georgian basketball, players and coaches, which made basketball an advanced sport and reached Eurobasket.

Starting today, we will tell you about players who have played in the official matches of the Georgian National Team and contributed to the development of Georgian basketball. Story from Nikoloz Derugin, Vakhtang Natsvlishvili, Vladimer Stephania to Zaza Pachulia, Viktor Sanikidze and Manuchar Markoishvili, whose history of participation will complete the first phase of the project.

In the second stage, we tell you the story from 1922 until the independence of Georgian basketball. 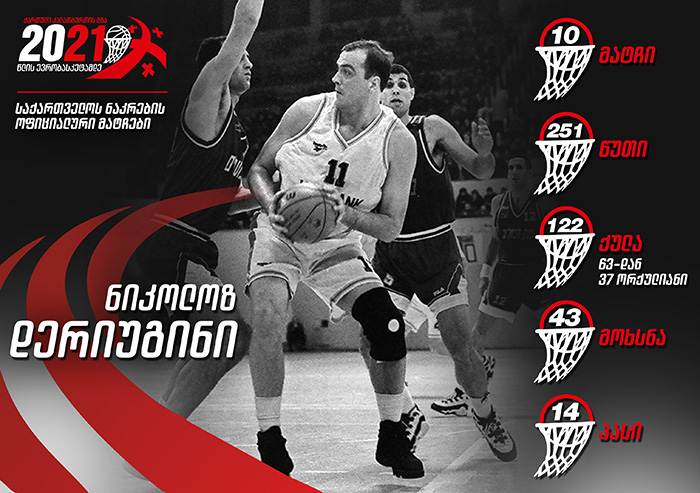 Our team played its first international match in Birmingham, England on May 24, 1995, against Poland on the Eurobasket 1997 qualifiers. Vakhtang Natsvlishvili recalls the first minutes:

It is symbolic that the first points were scored by the assist of the world and European champion Nikoloz Derugin. He defeated American team in 1982 (at the World Championship in Colombia). Thirteen years later, he didn’t hesitate to wear a jersey with the inscription “Georgia” on it.

However, if not an injury, we might have achieved Eurobasket on our first attempt:

“I suffered a severe knee injury in 1986. I had to wait 5 years. I was back on the court later, but as the saying goes, I was playing with pieces. At first I was defending the honor of the Hungarian “Mufti”, and during the first matches of the National Team I was playing in Slovak “Slovakfarma”. Extra weight didn’t bother me then and consequently the knee didn’t hurt too much, though it was constantly wrapped, afraid of hurting myself for a second time. When I was getting the ball, I was looking down first… I was trying to jump with my right foot and trying to slam both my legs together. So I was doing what I could for the team, but the injury didn’t allow me to play freely“, – recalls Nikoloz Derugin.

Georgian National Team went through the qualifying round in Birmingham, started with a roaring victory over Bosnia (77:66) and if they had won with them in Berlin too, the European Championship would be very close. But it didn’t happen until 2011.

Nikoloz Derugin ended his career with 10 games in 1996 after the first round. 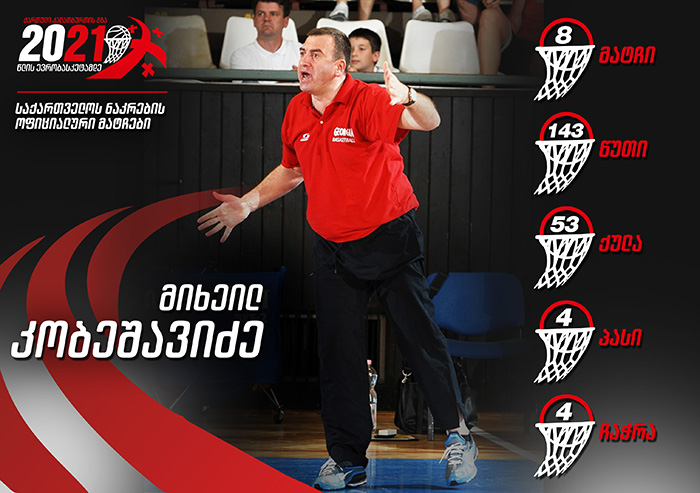 The goal of Georgian National Team on Eurobasket 1997 was to get into the three best teams in the group.

– The favorites were England and Poland. They defeated us. In the last two rounds we had to play against outsiders, Wales and Luxembourg and we were sure we would win. We had to fight Denmark for the third place. Those of us who won would get the next stage ticket, ” – recalls Mikheil Kobeshavidze of the first qualifier of the national team.

Georgians had a new concern: to prove to the commissioner that the match against Wales should not be judged by a Danish man.

We defeated Wales 101:73 and Luxembourg – 81:64 and returned to our country proudly. By the way, Mikheil Kobeshavidze’s 13 points against Luxembourg was his record in the National Team.

He played three more matches in the National Team and started coaching after finishing his career. The proof of him being a successful coach is that he has been a head coach of the Georgian National Team for several years. 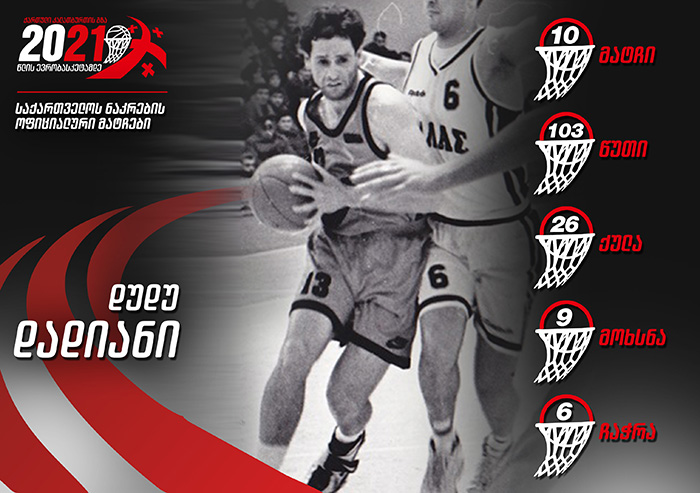 There was a semifinal stage after the qualifiers, where we had much stronger rivals. Among which was Greece, who eventually won 9/10 matches and took the first place.

Davit Tortladze, a member of the national team, recalls one of the episodes of the Tbilisi match:

By the way, the match against Greece on February 26, 1997 at Tbilisi Sports Palace was the last in Dudu’s career.

He was working as Vice President of the Basketball Federation since 1999. If not Dudu, Zaza Pachulia’s debut in the National Team would be postponed for three years:

The leadership Ulker wasn’t letting me to Georgia as the Turkish Playoffs were being played. Upon hearing this, Dudu Dadiani managed to do so, one morning the manager of Ulker came to me and told me: get ready, we are going to the airport! He took me to Ataturk Airport. I was excited and at the same time surprised, not realizing what happened to change the situation so radically. When the manager stopped the car at the airport, he looked at me said: Promise me that you will definitely introduce me to Dudu Dadiani. I happily gave him a word and flew to Georgia. If not his effort, my debut would be postponed for three years, to 2004…

90s basketball news will be continued… the web-site of Georgian Basketball Federation will tell you about Vakhtang Natsvlishvili, Davit Berdzenishvili and Irakli Baqradze next time…