Last week you met three players of the National Team from the 90’s – Nikoloz Derugin, Mikheil Kobeshavidze and Dudu Dadiani. You would also read Vakhtang Natsvlishvili’s comment on how he opened the score with the assist of Nikoloz Derugin on May 24, 1995.

The first official match was preceded by many important events: from the country’s declaration of independence to the founding of a basketball federation and the creation of a national team.

When was the team born? It is not difficult to answer this question:

“I became a part of the historic meeting on March 20, 1994, – says Vakhtang Natsvlishvili, – It was on this day at the basketball court of Vera Park, when we decided to establish Georgian National Team and set a goal to get to the Eurobasket. We were young then and could not realize that we were complicit in the beginning of a new era. If Nikoloz Derugin, Gela Darsadze and others made history within the Soviet Union before, they would have played in the name of independent Georgia since 1994 … I remember how legendary Otar Qorqia spoke about our responsibility.”

It is symbolic that Otar was also at the forefront of the creation of the Soviet team: USSR first appeared at the European Championship in 1947 and won gold with the participation of Otar Qorqia (he scored 23 points against Czechoslovakia in the final).

Vakhtang Natsvlishvili had a long and exciting career – he played for the national team from 1995 to 2007. Most importantly, he was a captain. 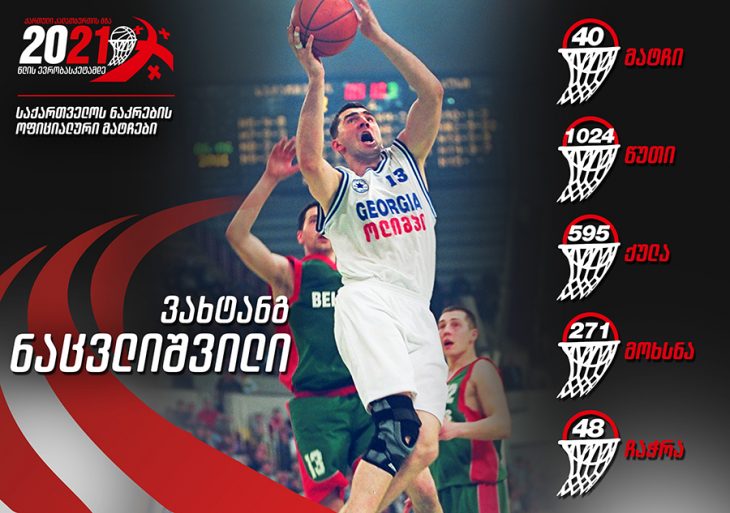 “I remember home game against Turkey, where I scored 33 points and we were really close to victory. Georgian team has had many good matches. In the 90’s, although the team was mainly composed of players of Georgian Championship, they had high class.”

After the end of his basketball career, Vato Natsvlishvili celebrated the championship of Georgia as the president of Dinamo Tbilisi twice.

Vakhtang Natsvlishvili played under the leadership of Tamaz Okruashvili in Cactus. This specialist (passed away in 2014) has been around for generations and his opinion about Natsvlishvili should be interesting:

-Vato is a leader, a fighter and does not know what fear is. He had to do much more than he did. I think Natsvlishvili showed only 25-30 percent of his opportunities. I find it difficult to name the reason. But let’s not forget the period in which he worked. Professional growth coincided with the not-so-pleasant time, in the mid-1990s, the situation in Georgia was very difficult. He was achieving everything very easily at the expense of talent, it maybe was the reason for not improving every component of the game… 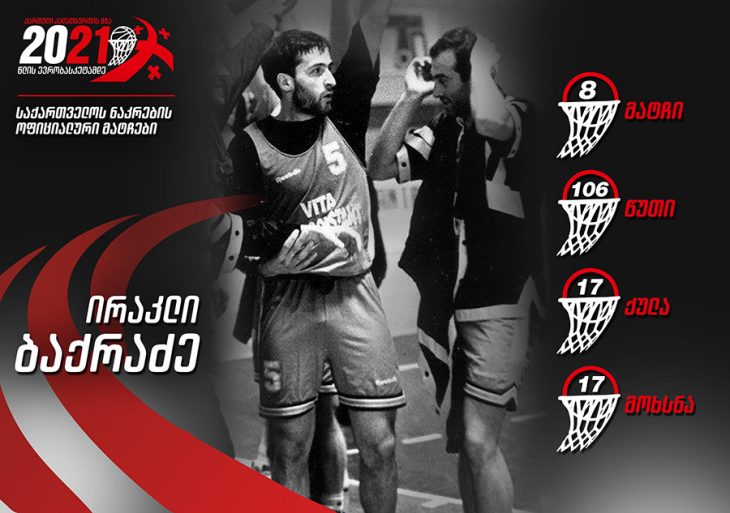 Irakli Bakradze played in the first qualifier held by the national team, then was in the semi-final stage and ended his career after eight matches.

Among other interesting stories, one funny story relates to him:

The national team was flying to the international tournament. Baqradze and Rezo Chkheidze summoned the airline hostess and asked him to publicly announce the “death” of legendary basketball player Kolia Derugin. Bakradze and Chkhiro have significantly increased the list of Kolia’s titles. Stewardesse told the passengers about Kolia’s “death” in the middle of the flight. Derugin, who was with the team, was listening to his necrologist in live. What is even more amazing is that Derugin was even more upset to hear about his increased age. Kolia was 37 at the time, and the boys had declared 40 years.

It should be interesting to hear Irakli Baqradze’s opinion on his own son:

“Gega is currently one of the best Georgian guards. He has great potential, but shows just 30% of his abilities. Gega is shackled due to his complex character. However, at the expense of hard work and the right experience, he will be able to realize his opportunities. ”

In 1995, the coaches of the Georgian national team had a chance choose between great forwards for the European qualifiers – they had: Nikoloz Derugin, Vladimer Stefania, Vakhtang Natsvlishvili… David Berdzenishvili’s place was also found in such a competition, which points out his usefulness.

Like many players of his generation, Dato has not shown his full potential, though he has played 22 matches in his nine-year career.

He was also the “initiator” of the fight against Sweden …

“The provocation of the Scandinavians sparked a two-way fight at the Georgia-Sweden national team meeting at the Sports Palace. Georgians were particularly active. I was the only one who tried to seduce my teammates and fall into the middle. But the referees of the match rated my active action as escalating, and I was dismissed from the court anyway,”- Dato Berdzenishvili recalls with a smile.

He traveled to Europe, played in Brazil, and returned to Georgia, he won the Georgian championship as well. His last match in the Georgian national team was in Macedonia on September 15, 2004.

At the end of his career, David Berdzenishvili opened his own children’s basketball school in classical gymnasium (formerly the first public school), where Dato serves as a coach.